I Am Not a Robot

A computer monitor with a screen resolution of 3,840 horizontal and 2,160 vertical pixels (2160p). 4K monitors can function as small 4K TVs with 24" to 30" screens because they scale 1080p input to the 4K resolution. Such monitors, which debuted in the 2013 time frame, have both DisplayPort and HDMI inputs for connections to computers and A/V equipment. See 4K TV, 4K resolution and 5K monitor. 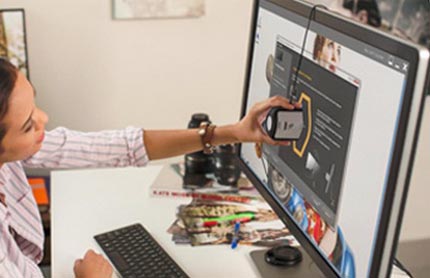 The woman is calibrating the screen on this 30" Dell 4K monitor, which debuted in 2014. With a pixel depth of more than one billion colors, the screen tilts, swivels and is vertically adjustable. (Image courtesy of Dell, Inc.)