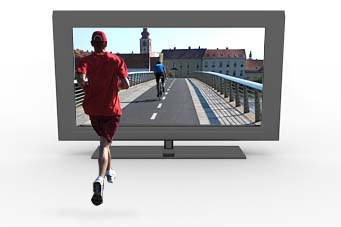 Virtual Reality
Virtual reality is a type of 3D visualization that is used in space flight simulators as well as games and entertainment. Wearing goggles, the 3D illusion comes from being immersed in a 360-degree environment. The experience is augmented by interacting with physical wheels, buttons and dials. See virtual reality.

3D Without Glasses
"Autostereoscopic" 3D eliminates the glasses and dates back to the mid-20th century when printed images first gave the illusion of depth and slight animation (see lenticular printing). Still widely used in printing, autostereo methods evolved to display screens for cellphones and portable video games (see lenticular 3D and parallax 3D). 3D without glasses is the Holy Grail of the gaming and TV industry, and improvements are made every year. In 2013, the Stream TV Networks system introduced a glasses-free 3D technology (see SeeCube), and Sony debuted a 3D monitor in 2020 (see Sony Spatial Reality Display).