A home stereo system for playing music that comes in myriad sizes and shapes. Modern music systems contain an AM/FM tuner, CD player, amplifier and speakers, while older units offered a tape cassette player. Along with standard CD music tracks, they may also play MP3 and other compressed audio formats either on an optical disc, memory card or streamed from the local network or Internet.

Music systems are often Bluetooth enabled and serve as a speaker for mobile devices. They may also connect to satellite units for multi-room playback. Some units feature a dock with a Lightning connector for iPods, iPhones and iPads. See boombox, Sonos and Lightning connector. 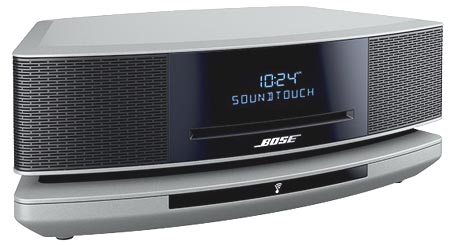 With built-in AM/FM radio, Wi-Fi and Bluetooth, this Wave SoundTouch system IV also includes Spotify, Pandora, iTunes and other audio sources. Since its introduction in 1984, the Wave product line from Bose has been very popular. In 1992, the tape cassette was replaced with a CD player. (Image courtesy of Bose Corporation, www.bose.com)