An earlier printer that used a plastic or metal hub with spokes. At the end of each spoke was the carved image of a letter, digit or symbol. In the early 1980s, daisy wheel printers cost as much as USD $3,000 and more. They clicked and clacked to produce near typewriter-quality output. 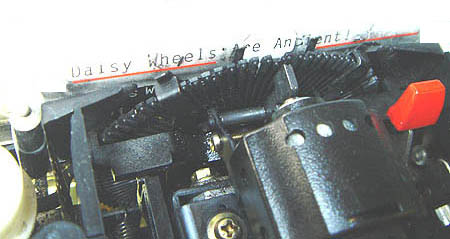 When the required character spun around to the print hammer, the image was banged into a ribbon and onto paper. The entire wheel mechanism was then moved to the next location.

All 330 terms in the first edition of The Computer Glossary (the origin of this encyclopedia) were written in 1980 on an 8-bit microcomputer and printed on a daisy wheel printer. Because the daisy wheels contained only one font size, the term names were left blank so that large Kroytype labels could be pressed on by hand afterwards.