Rewiring audio toys to make new sounds. It involves exposing the circuit board in a device such as a Texas Instruments "Speak & Spell" toy and short circuiting leads until an unusual sound is discovered. Circuit bending started by accident in 1966 when Reed Ghazala's 9v battery-powered amplifier shorted out in his high-school desk drawer. In 1992, he coined the term for a series of articles in Experimental Musical Instruments magazine. For more information and samples of "Bent Sound," visit Ghazala's website at www.anti-theory.com/soundart. 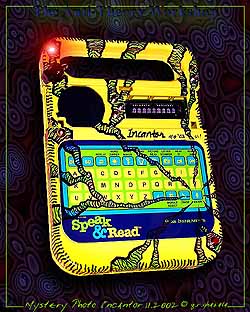 This "circuit-bent" instrument is one of the more recognizable audio devices on Ghazala's website. Others are quite exotic! (Image courtesy of Reed Ghazala, www.anti-theory.com)