An "organic" LED is a technology for display screens as well as room lighting. For a general explanation, uses and history, see OLED. Passive matrix OLEDs appeared in cellphones and MP3 players in the 1990s, and active matrix OLED devices followed in the late 2000s (see AMOLED). OLED shares similarities with both LED and LCD technologies.

Unbelievable Technology
OLED TV screens are approximately 3/16" thick, and that includes the front glass and back substrate. In fact, the actual display technology in between the glass and substrate is so thin that it is not even visible to the naked eye. It comprises a dozen layers made up of transistors, emissive materials and color filters that combined are 1/200th the thickness of a human hair. Following is an explanation of this amazing display system. 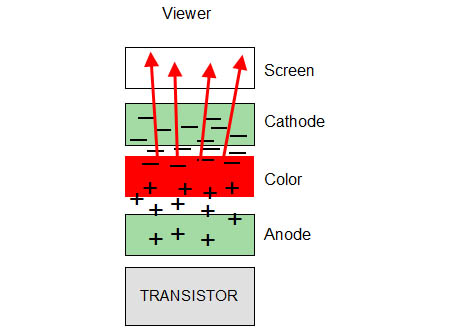 OLED technology emits red, green or blue light directly. Varying amounts of current applied to the transistor cause electricity to flow between cathode and anode, energizing the color layer to emit, which in this example is red.

Like an LED, when the holes in a positively charged anode combine with the electrons in a negatively charged cathode, particles of light (photons) are generated. The color comes from the fluorescent or phosphorescent layer between the electrodes, and the current at the transistor determines the shade of color. When manufacturing phone screens, subpixel colors can be deposited side by side.

On large TV screens, it is difficult to align the emissive subpixels side-by-side, and the OLEDs in TVs do not generate the colors. Instead, the color layers create a backlight that shines through color filters like an LCD/LED TV. In this example, yellow and blue combine to make varying levels of backlight, the amount of which depends on the current applied to the transistors. See LCD subpixels. 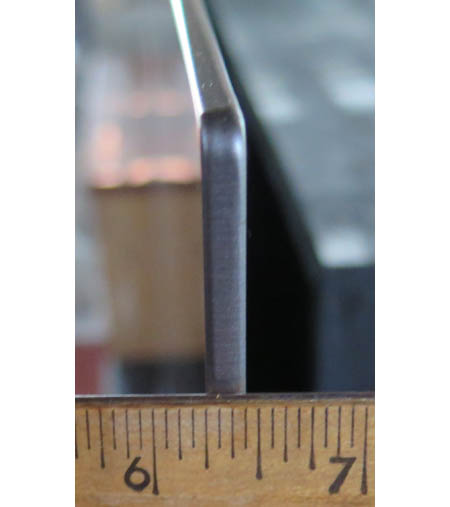 OLED TVs are only 3/16" thick, but 99.99% of that is viewing glass and substrate. The actual OLED layers in the middle occupy less than 1/200th the thickness of a human hair. The following illustration was created with the assistance of Universal Display Corporation (see PHOLED).